Throughout 2016 & 2017 Bishops Gate Hotel have hosted a number of events with the aim of raising funds to support local organisations, alongside this we have also supported other events through donating complimentary vouchers for hotel services to be used in raffles and prize draws.

Community Fundraiser Maeveen Brown has expressed her gratitude to everyone from the NI Hotels Federation who contributed £2,868.85 towards Alzheimer’s Society during a fundraising event held at the Federation’s two day conference, Hospitality Exchange..

Speaking at the formal cheque presentation, Hotel Director Ciaran ONeill said:
“We are delighted to support the charity in its fundraising efforts. I meet many people asking if there is anything I can to do to help, especially people who are affected personally by dementia.  I would ask all of those who have expressed the desire to act and make a difference to those affected by dementia to get in touch with Alzheimer’s Society today.”
Maeveen Brown from the Alzheimer’s Society said: “I wish to sincerely thank Ciaran O’Neill in his role as President of the NI Hotels Federation for choosing Alzheimer’s Society as this year’s charity. All of this work has led to a greater understanding and a greater level of awareness regarding dementia. The public now realise that this is not just a natural part of aging. It’s a physical disease much like cancer and they are motivated to help us in the fight against it. 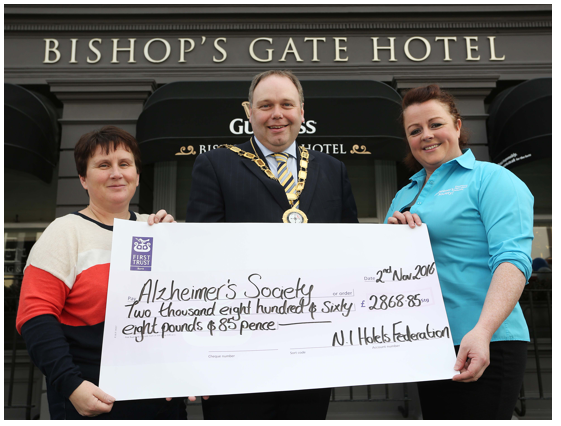