Top Golfers 'tee' off at Walled City Pro Am

- Posted on: 15/03/2017 -
The Walled City of Derry Pro Am Tournament, the highlight in this year's PGA calendar, is set to take place in Derry City on August 26th and 27th next. For the first time ever the two courses, City of Derry Golf Club and Foyle International Golf Centre, will be getting in on the action on both days.
This will provide a larger number of competitors with the opportunity to put their skills to the test, while also promoting the local offering to a wide range of visitors.
Launching the Walled City Pro-Am golf tournament Odhran Dunne, General Manager, Visit Derry said: “Ireland’s North West region is currently at the forefront of golf tourism on the island and whilst this tournament will be an excellent opportunity to promote the quality of the city’s parkland golf, it will further enhance our reputation as a central hub for golfers to enjoy a premier golf and tourism experience.”
Visit Derry in partnership with Derry City and Strabane Council are sponsoring the tournament which will be one of the top attractions in the North West social and sporting calendar this summer.
In 2013, Derry-Londonderry was awarded City of Culture status and enjoyed a change of attitude, a new pride in cultural identity and an acceptance not so evident before. It was an incredible and sensational year as the City hosted a raft of events. It was brilliant for the region and helped to spread the word about what a wonderful place it is.
Attracting premium sporting events such as the Walled City of Derry Pro Am tournament is critical for the region. It has been four years since a golfing competition of this magnitude took place and local businesses such as Bishop’s Gate Hotel, Diageo NI, Total Golf, Nuprint, Desmond Motors, Partridge Peartree and Mint Bet have been instrumental in attracting Irish PGA professionals back to the City. This tournament will showcase local and international talent, while making a significant contribution to the local economy.
Michael McCumiskey, secretary of the PGA in Ireland, explains who can get involved and how: "This event will attract the top Irish PGA Professionals from all over Ireland. They will be competing against each other for the title and guaranteed prize pot of 15000 euros whilst teams of three amateurs will compete alongside the professional for the coveted team Prize.  The event will have both Ladies and Gents sections.
"On the Friday a junior event will take place, which is kindly supported by Irish PGA professionals. Undoubtedly, golf enthusiasts from across the North West and further afield will be keen to see PGA professionals play and I'm sure there will be high demand for spaces on teams. It will be a very busy weekend for the City."
To obtain an entry form contact Sammy at City of Derry Golf Club on 028 7131 1496 or Conor at Foyle International Golf Centre on 028 7135 2222.
Click here to book your accommodation in Derry for Pro Am Tournament 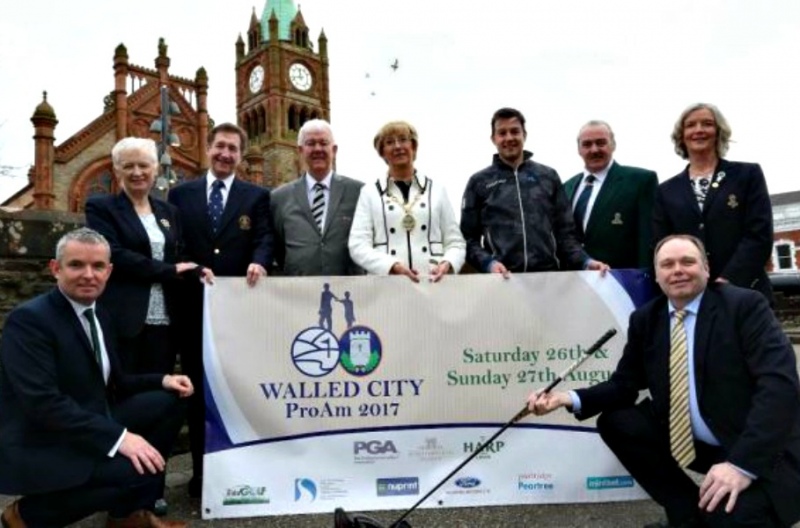